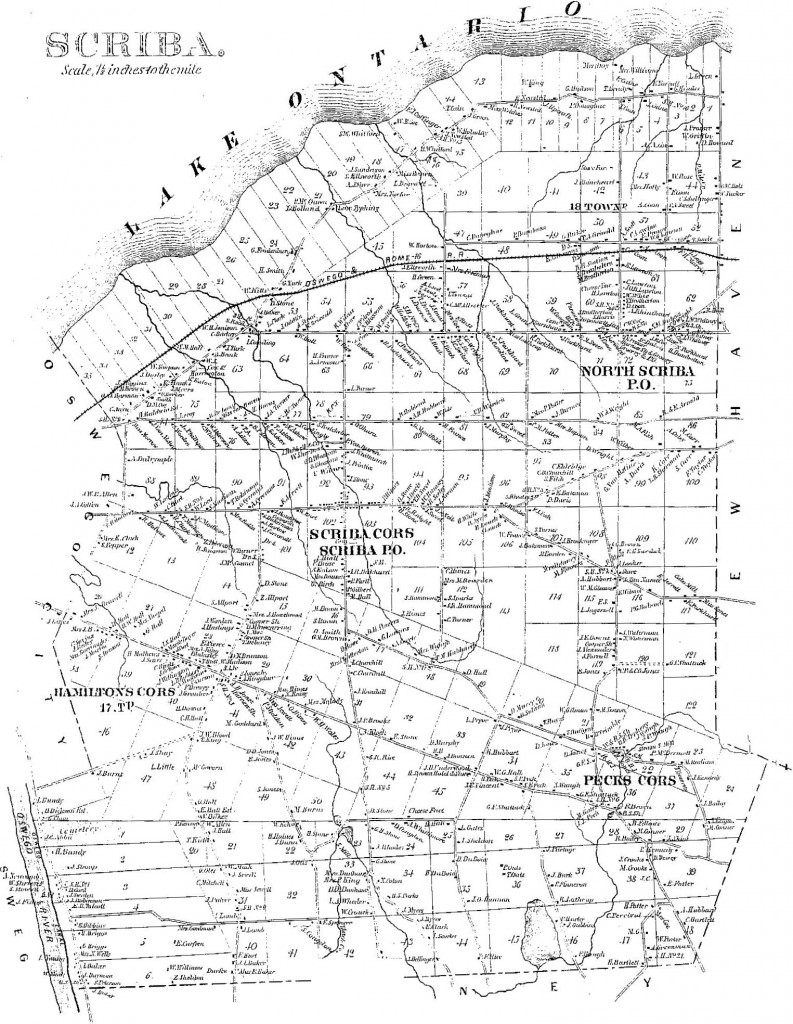 As most of us know, the area of land, which became Scriba’s Patent was first acquired by John and Nicholas Roosavelt in 1791. In a contract with the New York State Land Commission, the Roosevelts’ Purchase included a tract of land situated in the present counties of Oswego and Oneida consisting of 530,000 acres.

Aside from thousands of acres that were disbursed to a number of prospective settlers, speculators, and to the Oneida Indians as fishing and hunting preserves; the Roosavelt Tract became Scriba’s Patent in1793 as partial payment of debts owed to the Scriba Bank by the Roosevelts. Benjamin Wright of Rome was employed to take a resurvey of the nearly 499,000 acres in the Patent, and lay it out in survey towns. Township Number 18, and part of Township Number 17 became the Town of Scriba. Its border on the North was Lake Ontario, and on the West the Oswego River.

At the extreme Northwest comer of the Town, where the Oswego River discharged into the Lake, was Fort Ontario. This Fort was occupied by the British until 1796, and while they held the Fort, a “dead zone” of one mile was maintained. Anyone entering this area without permission could be shot. Naturally, this tended to restrict settlement in the township.

The first permanent white settler in Scriba, outside the Fort was Henry Everts from Montgomery County who located on a river lot in 1798 at the foot of what we now call Seneca Hill . His son, Henry Everts, Jr, was the first white child born in the town.

The  peak settlement  in the 19th Century was in 1845 (5,495 people), three years before East Oswego was removed from Scriba, and combined with West Oswego to form the City of Oswego. Researchers should note that records related to the Northwest corner of Scriba may be found in the city archives after 1848.

Prior to that time, the population had nearly doubled from 2,037 in 1830 to 4,051 in 1840. From the 1850 on the population fluctuates slightly from 3,000 until 1890 when it falls below the 2500 mark. Part of the decline in population can be attributed to the fact that jobs were in the cities, and unless there was public transportation, people moved. The railroads in Scriba were in the northern and western sections of the township, so people left. As a result, the population declined, and by 1900 remained static at 2,480 the same as in 1890. The westward movement also contributed to the decline.

During the 20th Century, the population hit its low point in 1920 with 1,817 people.. It was not until 1970 that the population of the township approached the number that it had in in the 1800″s. In that year, the census figure was 3,619 people- about 400 people less that in 1840. Prompting the growth was the establishment of water lines, and Scriba became increasingly suburban. Today, the population is about 7500 people.

The Town of Scriba was created  by an act of the State Legislature  passed  on April 5, 1811. The Town was to come into being in March 1812, and as a result, the first Town Meeting was held on March3, 1812. At the time of this first meeting, Oswego County was not created.  Scriba and Volney townships were formed from the town of Fredericksburg, Oneida County, and it was not until later, 1816, that the County of Oswego was created. Scriba, then, was part of Oneida County. People researching early Scriba families should  check Oneida County records.